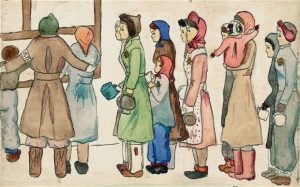 The Educational Exhibit shares the stories of the children, who were used for propaganda during World War II. One of these victims was Peter Ginz, who created the drawing “Moon Landscape.” A copy of this piece was taken to space by NASA Astronaut Ilan Ramon with the Columbia Mission. This piece never returned

In honor of the victims of the Holocaust and the space crew of Columbia, Andrew Feustel took this piece with his six-month-long expedition to the International Space station in 2018. After his return from space, the copy of the “Moon Landscape” was gifted to the Czech Center Museum Houston on February 1, 2020.

Surviving Through Art shares this piece and the stories of the many children that suffered through the hardship of Terezin. During this period, more than 150,000 Jews lived at the camp, of which 15,000 were children. The Nazis held them in Terezin before being sent on to the extermination camps in Poland. Of those 15,000 children who spent time in Terezin, fewer than 1500 would survive the war. These children underwent unimaginable suffering while being used as fodder for Nazi propaganda. All the while, they wrote, created art, and endeavored to survive. Today a significant amount of their art and words remain even if the majority of them are gone.

If you wish to learn more about their stories, visit the Czech Center Museum Houston. The museum also offers a FREE workshop for school field trips where students learn about the hardship of the young heroes in Terezin. Students will create artwork that will be displayed at the end of 2020.

20 spots available, extra rental of up to 100 spots possible 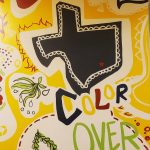 Color Over the Border 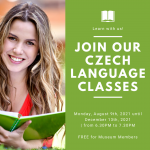