The artists will be at the exhibition’s opening reception on Saturday, June 7, 2014, from 5 pm until 8 pm, to visit with guests and provide insights about their work.

Ink&Image highlights the breadth of contemporary printmaking with works by seven area printmakers.  Archway Gallery is one of the venues for PrintHouston 2014; this is the

The artists will be at the exhibition’s opening reception on Saturday, June 7, 2014, from 5 pm until 8 pm, to visit with guests and provide insights about their work.

Ink&Image highlights the breadth of contemporary printmaking with works by seven area printmakers.  Archway Gallery is one of the venues for PrintHouston 2014; this is the fourth annual city-wide celebration of the ancient art of printmaking. Events are scheduled at Houston galleries and museums.

Andis Applewhite, born in Pampa, Texas, lives and works in Houston. She is known for her silkscreen prints that tend toward the abstract expressionist or minimalist styles. Her subject matter is an exploration of the dualities in life and her use of spontaneous strokes and color convey a symbolic interpretation of the resulting tension that is felt. To counterbalance this tension she is drawn to creating minimal meditative prints, woodcuts and, most recently, video.

After graduating from San Jacinto College, with a degree in graphic arts, Applewhite soon found her voice in printmaking. Her work has been featured in solo shows at the Washington Printmakers Gallery and The National Institutes of Health in Washington, DC. She was a part of PrintHouston 2013 exhibiting at McMurtrey Gallery. She has participated in numerous group shows in Houston, California, North Carolina, Virginia, Ireland and Shanghai.

She is an elected Member of the Los Angeles Printmaking Society and California Society of Printmakers and will be included in their Centennial Book in honor of their 100th anniversary. Applewhite is a founding member of PrintMatters. She is also a founding and key board member of PrintHouston. Applewhite’s Freedom Series is inspired by the practice of artists confronting the viewer with known cultural icons and objects and presenting them in a form which incites new conversation and brings new awareness on a personal and social level. In the spirit of Jasper John’s flag paintings, she is building on his work by combining multiple color combinations and writings into this new work.

Her series of flags is meant to engage the public on an aesthetic level and also bring to mind on a deeper level a question of “what is freedom?”

Cathie Kayser is a Houston artist whose work is in collections in Houston, Los Angeles, Seattle, Cincinnati, and Tel Aviv. She has participated in numerous group exhibits in Texas, most notably in Houston. She is a founder of PrintMatters, an arts organization she began with four other artists in 2009. In 2010, they created PrintHouston and Rockin’ Rollin’ Prints.

Kayser has taught workshops in Houston and Austin. She is the studio manager and printing assistant to master printer Patrick Masterson at Burning Bones Press. Kayser works in series, taking an element from one series and developing it into a new one. For several years she has worked with a cast of characters that include several birds who appeared to her during times of loss. Nets and maps were important elements of these pieces, worthy of further explorations.

She is now working on a new body of work that includes lithographs, intaglios, collagraphs, and cut-out pieces. The net is the sole subject. To Kayser it represents the ultimate duality: an object full of holes that can hold and protect or trap and ensnare.

Anna Mavromatis’ works are similar to entries in a personal journal where, instead of words, emotions and thoughts are expressed through colors, shapes, gestural markings, and folds.  By superimposing ancient and modern printmaking methods she is able to sculpt and collage transforming the handled paper into a cosmos where all her needs, feelings, and things she wants to revisit, re-examine, or even forget find a place to be expressed.

Mavromatis attended Glassell MFA, Printmaking, and the London College of Fashion, University of the Arts London. Her works have been shown in numerous group exhibits in Europe, Australia and the US. Her solo exhibitions include: “Cyan Silhouettes” at Center for Contemporary Craft and “Paper Tales” at Hooks Epstein Galleries.

The narrative in Macromatis’ work is about attempts to re-establish connection with people, situations, beliefs and roots long lost or suddenly interrupted. It is a quest to revisit unresolved encounters, reach previously missed understandings, or simply express emotions without the use of words.

Elvia Perrin’s approach is pragmatic, often monotonous, and relates to her need to find balance and control. She often creates finished prints or drawings that are then cut up, reassembled, and reorganized for additional printing on top of the original image to find a new order. Her process develops through the dialogue between an idea and the art-making process which includes editing, overlapping, stacking, and layering of ink and images. She uses grids, sewing templates, office labels and other everyday organizational materials.

The grids create a controlled system to draw her squares and shapes by hand. There is an evidence of time in her mark-making. Perrin explores the repetitiveness of multiplicity of the image, the organization of patterns and surfaces through overlaying ink, and the contradictions of formalism with sectioning and shape.

Through printmaking she can exploit the redundancy of the matrix and use her plates as a visual language, layering and reusing plates to create various monoprints. Perrin’s prints are a convergence of order and reordering and the revealing and veiling of organized systems and personal habits. She explores the banality of formalism; she finds order in the layering textures and traces of patterns with a quiet minimalist approach.

Bede Van Dyke’s background as an architect drives his need to counteract the demands of architecture with the more fluid form of self expression through the process of art-making.  Much of his artwork addresses the landscape, both in the traditional sense and in a more abstract sense, and is sometimes paired with psychological drama.

For the printing process, he tries to incorporate multiple printing techniques to achieve this end result. Born in Chicago, Van Dyke lived with his family in Milwaukee, Wisconsin, and then Houston. He received his Bachelor of Architecture Degree from the University of Houston and in 1988 he established Bede Van Dyke + Architects.  Van Dyke has since studied printmaking at the Glassell School of Art and participated in workshops with Ron Pokrasso in Santa Fe, New Mexico.  His work has been chosen for display at The Arts Alliance Center in Clear Lake and has been featured in one person shows at M² Gallery, Archway Gallery, and Third Stone Art Gallery in Fennville, Michigan.

David Webb is a printmaker and photographer.  He is a biologist whose outlook as an artist is strongly influenced by his scientific background. He retired in 1995 from a career in genetics education which included an academic focus on population biology and the ecology of organisms in space and time.

When he turned his attention to art, he did not lose his interest in living things; therefore, most of his art is grounded in an appreciation of nature and man's place in relation to other living beings. His hope is that his artwork will inspire the viewer to look more closely at the complexities of a world in which we are often too busy to notice. Webb does not have a single working style, and produces works across a wide spectrum of media and styles.

They are united by clarity of vision, precision of technique, and attention to detail. Webb’s interest in art came after a career in the sciences. He earned a BS in biology, an MS in evolutionary genetics, and an EdD in genetics. Webb worked for 11 years as the director of the genetics and molecular biology teaching prep lab at the University of Houston.  He began to take art classes, first at the Art League, then at the Glassell School.

His first prints were traditional etchings, primarily of objects that had interested him as a scientist. Webb’s intaglio prints have become more abstract collagraphs constructed from modeling paste laid onto Plexiglas and worked while wet. These are inked with several colors à la poupée with color rolls to bring out a wider palette.

Mary Lee Gray’s process of art-making involves using images, color and form to communicate her response to what has touched her life.   Her initial impulse may come from a tree in light, a human being in motion or being very still, a thought, phrase, random sound, or from the tools and process of making the piece.

Making a work of art is like putting together a puzzle from disparate pieces.  The surprising end is a new image that can stand alone, speak for itself, and if it is successful, provoke a response from the viewer; art is a discrete form of communication. Gray grew up moving from New Orleans to Galveston to Tampa, then on to New Hyde Park, Hempstead (both New York), Brooklyn, Birmingham, then finally Pascagoula, Mississippi where she finished high school.

She graduated from Mississippi State College for Women with a BA in art and English then went on to receive a MFA from the University of North Carolina, where she first discovered the strong black woodcut images of the German Expressionists and inspiring her to become a printmaker. Gray completed her doctorate at the University of Houston, earning an EdD with a concentration in curriculum and instruction. She taught classes from kindergarten through college level and was art supervisor of a school district.  She continued to make prints and exhibit them.

In addition to Archway Gallery, Gray’s prints have been exhibited at Lawndale, Christ Church Cathedral, the Art League of Houston (several exhibits including Dimension Houston), the Pottery Guild, the Museum of Printing History, the regional Southeast Print exhibit and in a national traveling exhibit. She has taken classes at the Glassell School in drawing, etching, lithography and monoprints. Through the years, she has been active in the art community serving on the boards of the Art League of Houston, Houston Art Education Association, and City ArtWorks. 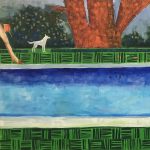