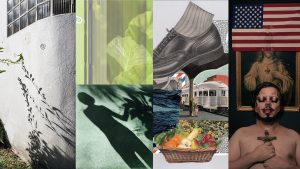 In the Front BOX gallery, we have “Myth + Memory” photo-based work by Rebecca Finley and Carol Hayman @hayman.carol. This exhibition uses photography to explore our understanding of recollection and storytelling. Rebecca Finley’s work deals with photographic truth and distorted memories. While Carol Hayman’s @hayman.carol work suggests myths, allegories, and daydreams in a dreamworld of

In the Front BOX gallery, we have “Myth + Memory” photo-based work by Rebecca Finley and Carol Hayman @hayman.carol. This exhibition uses photography to explore our understanding of recollection and storytelling. Rebecca Finley’s work deals with photographic truth and distorted memories. While Carol Hayman’s @hayman.carol work suggests myths, allegories, and daydreams in a dreamworld of cosmic nature, evoking notions of disappearance, deconstruction, and self-effacement. Our Back BOX gallery you will find the exhibition entitled “Azurest” by artist Michael Borowski. The project documents Meredith’s life, home, and role in architectural history, and it speculates on the intersections of race, queerness, and domestic space that were not, or could not be, recorded. We are excited that this time around we have Anastasia Kirages creating a work in our Window BOX gallery space. “Space City Glueston” show is a macro and micro reflection on Houston maps, neighborhoods, and their history through the medium of collage. This exhibition features both a collaborative site-specific large-scale mixed-media piece and six smaller works that represent the (now defunct) geopolitical wards of Houston Finally the Upstairs gallery Urethra Burns presents “God Bless America “ tackles the hypocritical camp display of American patriotism and Christianity. ***This exhibition contains sexual imagery not suitable for viewers under 18. Viewer discretion advised.*

A special thank you to Houston Arts Alliance, the Mayor’s Office of Cultural Affairs, The Brown Foundation and all who have helped to support our programing.

These current works are monochrome photo intaglio prints, from original photographs by the artist. They are printed on BFK Rives, bark paper, and chine collé washi paper, with Charbonnel ink at Slugfest Print Studio in Austin, Texas. The themes deal with mythology and myth-making attached to objects and locations from urban legends to Native-American and Aboriginal story-telling, with Greek, Roman, Japanese, and Norse mythology, heroes, sheroes, and super-heroes, in comic books, sci-fi tales, and ghost stories told around a campfire. These prints give homage to indigenous ways of knowing through stylized, semi-abstracted figurations depicting a potential narrative sequence. Shadows of mythical stories haunt the landscapes, alluding to creation stories. The work suggests myths, allegories, and daydreams in a dreamworld of cosmic nature, evoking notions of disappearance, deconstruction, and self-effacement. The mythological world is part of being human. These prints bridge past and present, the mystical and concrete. We are part of a network of enduring life forms and the world is a better place if we understand each other and bring ourselves into balance with the land around us, difficult, but we can start with stories of our origins.

Carol Hayman @hayman.carol, photographer and printmaker, lives in Austin, Texas where she is a retired Professor of Anthropology from Austin Community College. She prints at Slugfest Print Studio, where her photographs become fine art prints or photo etchings, using polymer plates, an intaglio American French Tool press, handmade paper from France, Mexico, and Japan, with Charbonnel ink. She has exhibited locally, nationally, and internationally in Mexico, Guatemala, Peru, Japan, England, France, Spain, and Bulgaria. Her work is included in the collections of the University of Wisconsin Madison Archive, SGCI Archive at Kennesaw State University, Fort Wayne Museum of Art, Mesa Contemporary Art Museum, Bradbury Art Museum, Woodlands School Art Trust, University Health System San Antonio, and the Illinois Institute of Art Chicago. She has completed residencies with the Coronado Studio Serie Print Project and with the University of Texas at Casa Herrera in Antigua, Guatemala.

This work is from my project, Fragmented Memory , which deals with photographic truth and distorted memories. I am also interested in the Rashomon effect and how people remember the same experience differently based on their own perspective. I sustained memory loss as a

result of a car accident twenty years ago, and while working on a project about my hometown in Tennessee, I dropped my hard drive resulting in a loss of digital memory. I became interested in the bent and fragmented images that were retrieved. I layer photographic data much as we edit and layer our recollections of past events. We do this without even realizing it. Photographs often help fill in these gaps when contemplating the past. Do we really remember, or have we just convinced ourselves of the memory because we’ve seen evidence that the moment happened? This work has served as a way of processing a traumatic event that occurred twenty years ago. It is also about living during a global pandemic and seeing mass amounts of disinformation. Every day I question how we are all living in this time with a different set of truths and conflicting information. We are only absorbing information that supports our own narratives. I am trying to find order in all the chaos.

Rebecca Finley is an artist who is originally from Knoxville, Tennessee and has lived in East

Texas since 2005. She received her MFA in Photography from the San Francisco Art Institute and her BA in Media Arts from The University of Tennessee in Knoxville. Rebecca currently holds the position of Professor of Art, Photography at Sam Houston State University where she is also the Graduate Coordinator for the MFA in Arts & Social Practices and Photography Program Coordinator. Rebecca’s current photo-based work deals with artifice, photographic truth, and nature. Her work has been exhibited throughout the United States and Internationally.

Azurest is a photographic examination of race, gender, queer desire, and homemaking in Jim Crow era Virginia. It is part documentary and part speculation. The primary subject is Azurest South (1938), the historic home and studio of Amaza Lee Meredith. Despite her exclusion from the architecture profession for being an African American woman, Meredith designed one of the earliest International Style buildings in Virginia, which she cohabited with Dr. Edna Meade Colson. The series combines photographs of the home and ephemera from Meredith’s archive at Virginia State University. The color blue is prominent in the building and echoed in cyanotypes made from Meredith’s snapshots showing African Americans engaging in travel and leisure activities. The project documents Meredith’s life, home, and role in architectural history, and it speculates on the intersections of race, queerness, and domestic space that were not, or could not be, recorded.

This project was made with the support of a 2019 grant from the Graham Foundation.

Michael Borowski (he/him) is an artist living and working in occupied Tutelo/Moneton land (Blacksburg, Virginia). He works with an expanded photographic practice, critically examining history, technology, and the built environment to show that design is not neutral, but reflects political values, personal biases, and desires. His work has been included in national and international exhibitions. He has been awarded a grant from the Graham Foundation in 2019 and a VMFA Fellowship in 2022. He received his MFA from the University of Michigan, and a BFA from the University of New Mexico. Michael is currently the Chair of Studio Art and Associate Professor at Virginia Tech.

Space City Glueston is a macro and micro reflection on Houston maps, neighborhoods, and their history through the medium of collage. This exhibition features both a collaborative site-specific large-scale mixed-media piece and six smaller works that represent the (now defunct) geopolitical wards of Houston. In addition to scale, I focus on using a lot of recycled materials in the show. For example, a cardboard city skyline will be visible in the forefront space of the Window BOX. With provided scissors, glue sticks and magazines, visitors will be encouraged to create their own Houston-centric collage during the length of the exhibition, also on recycled cardboard. These collages will then be added to the larger wall installation, reinforcing and illustrating the mutable nature of the City and its residents as the work changes over time. Additionally, through this project I was able to explore extending my usual solitary collage-making practice into the public realm, which is something that is relatively new for me as an artist.

Anastasia “Stacy” Kirages, a Houston-based collage artist and zinester, received a BA in Art History from the University of Texas at Austin, and certificates from the University of Pennsylvania’s School of Social Policy and Practice and the University of Houston’s SURE™ Program, in Arts & Cultural Strategy and Entrepreneurship, respectively. Currently, she is working toward her M.Ed in Reading Education at Texas Woman’s University. She has been a lead organizer for Zine Fest Houston (ZFH) since 2013. In addition to her work with ZFH, she volunteers with Black & Pink, Girls Rock Camp Houston, and the Montrose Center. Inspired by the work of Joseph Cornell at a young age while on a field trip to The Menil Collection, she quickly took to collage making and never looked back.

God Bless America tackles the hypocritical camp display of American patriotism and Christianity. Many people see American and Christian iconography as “untouchable” and I find it important to defy that. A notable amount of Americans already fetishize these symbols, so I asked, “Why not take it even further?” God Bless America uses queer art and drag to push political, religious, and sexual boundaries to force viewers to deal with Christian American culture.

The work in this exhibition comes from my experience with Christianity in America. Long story short, I have gone from growing up in an agnostic home environment to joining the leadership team in an evangelical Christian group in college to now an outspoken agnostic queer non-binary artist. I have had many points in my life where I questioned my beliefs from all sides. I hope this exhibition prompts the audience to question their own and others’ beliefs.

*This exhibition contains sexual imagery not suitable for viewers under 18. Viewer discretion advised.*

Urethra Burns (they/them) is an emerging multidisciplinary drag artist born and raised in Houston Texas. Their work is by nature political, uncomfortable for many, aggressive, sexual, and unapologetic. Urethra fully believes in the power of drag and art to change the structure of society and wields it responsibly. Urethra has had their work shown throughout Texas including Icosa Gallery, Austin International Drag Festival,  Blaffer Gallery, Match Theatre, and Box 13 artspace.

Free and open to the public 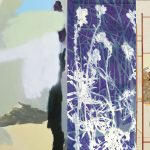