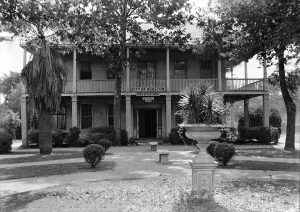 Recently, THS began its most ambitious restoration project to date and even discovered numerous archeological treasures in the process. Come see for yourself in our Museum Gallery.

In 2019, The Heritage Society (THS) celebrated 65 years of working to preserve Houston’s history, beginning with Houston’s oldest building. The non-profit organization was formed in 1954 to save and restore the Kellum-Noble House, which was facing demolition by the city. Originally built in 1847, the home has many stories to tell. Nathaniel Kellum was an industrious man who operated the brickyard and lime plant that produced the bricks and plaster to construct his house. Both the Kellums and Nobles had domestic slaves and some undoubtedly worked in the brickyard, thus contributing to the home’s construction and its story. Zerviah Noble not only lived in the home for decades, but also operated a small school there teaching young Houstonians to read and write, draw and paint, to embroider and appreciate music.  Highlights from the exhibit include original Kellum-Noble bricks, Zerviah’s silver pieces, and a “school room” complete with items from the Middle Bayou School which operated in the late 19th century near Clear Lake.
Over the years, THS has thoughtfully done preservation maintenance, continued historical research, and educated the public about Houston through the lens of the Kellums and the Nobles. Late in 2014, THS began its most ambitious restoration project to date with the goal of stabilizing the building’s foundation. Visitors will see an amazing video that walks you through the work we have done so far and details the future plans for the building.