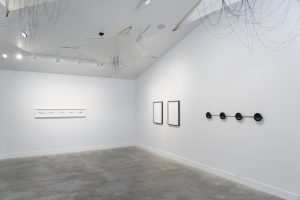 Online walkthrough of my solo exhibition, Point of Origin.

“Point of Origin” a multidisciplinary series takes cues from the connections between sound, behavior, and human emotion and transforms hard data into minimalistic experiences. The sounds of aviation have been part of the fabric of my life. My father served as a military pilot and those sounds that carried him away to serve resurfaced on his return.
In San Antonio, I lived under the direct paths of military training routes and the air ambulance system, and in Houston I found myself looking skyward again, following the red helicopters of Memorial Hermann’s Life Flight crews. My concerns for those inside sparked memories and growing curiosity, which led me to begin a conversation, and, with their data, I began my project, seeking to honor those involved in these life-saving missions, bear witness to the patients in their care, and record the routes from the five bases that support the Houston area.