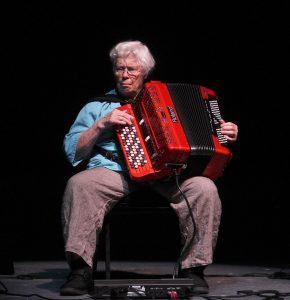 Explore the history of Nameless Sound through our 4th edition featuring essays and never-before-released audio/video of composer, accordionist, humanitarian and the creator of Deep Listening®, Pauline Oliveros.

Explore the history of Nameless Sound through featured essays, never-before-released audio, live performances on video, and other media gems from the historic vault. On May 31st, 2021, dive into Edition 4, which focuses on composer, accordionist, humanitarian and the creator of Deep Listening®, Pauline Oliveros.

Edition Oliveros explores the relationship between Oliveros and the Houston organization that she gave life to and mentored. 10 never-before-release audio and video recordings feature performances of Pauline Oliveros scores as well as concerts by Oliveros with Susie Ibarra, Susan Alcorn, Maria Chavez, Tom Bickley, David Dove, Sandy Ewen, Chris Cogburn, and Ricardo Arias, among others. Essays are contributed by Ione, Maria Chavez, and David Dove.

In case you haven’t had the chance to fully explore our first three editions on  Joe McPhee, Maggie Nicols, and Alvin Fielder, they  remain online and there is plenty to enjoy there.