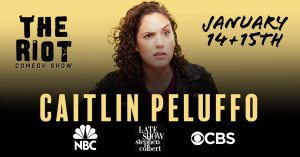 Presented by The Riot Comedy Show at Rudyard's

A fun evening of standup in the legendary comedy room at Rudyards! Tasty food, full bar, and comedy from visiting headliner Caitlin Peluffo.

Originally hailing from San Francisco, CA, Caitlin Peluffo is a comedian currently living in Brooklyn, NY. After a brief six year stint in art school where she studied performative video art (no, really…that’s a thing) she has expanded her talents to the stage. Peluffo has opened for comedians like Maria Bamford, Gilbert Gottfried, Gary Gulman, Colin Quinn, and the late Kevin Meany. She’s been featured everywhere from New York Comedy Club in the Big Apple to clubs nationwide talking about how she came to be such a lovable loose cannon.
The Riot is produced by Houston comedians Brian Gendron & Drew Jordan. These shows will sell out get your tickets now!